0
was successfully added to your cart.

My fascination with the Giants’ Cup trail started in 2014, when we were on holiday in the area. I ran from the hotel, Premier Resort Sani Pass, back to Castleburn, where we stayed. It’s a 30km stretch on the route. Somewhere on the trail a met a guy named Spurgeon, stating that he was scouting the route for a race.

In 2017, yet another year later, Landie and I participated in and won the 62km race. By then, we have completely fallen in love with the Drakensberg trails and I still think it is one of the best places in the whole world.

After a few years of racing abroad, we finally returned to UTD in 2021. I was interested in racing something further than the 62km. The hundred miler was something we eyed in 2020, but missed it due to COVID.
With a newborn and toddler in the house this year, my training was not enough for a hundred miler and I decided to race the 100km, which I am thankful for. We can race again!

This year proved a very strong racing field, probably one of the strongest fields of a 100km race in the last two to three years in South Africa. Lots of young talent was showcased – Rory Scheffer, Robert Rorich, Brendan Lombard, Comrades runner Admire Muzopambwa, Phillip Shezi, winner of the Sani Stagger, and many more, including previous winner Stuart McConnachie.

All hungry to race.

We started in the dark and immediately, Scheffer sped off. I didn’t try to chase him, hoping that Lombard, also a fast runner, would race him and one of them would fall behind, giving the rest of us a chance.

I did not reckon with Shezi, as I did not know him, and Muzopambwa. Muzopambwa and I settled into a comfortable pace and ran together most of the way.

I really looked forward to going down Sani Pass, as I love downhills. And Sani was almost 28km’s of sheer pleasure, mostly trail, with a few slight climbs in between.

As expected, Sani took my breath away. Stunning views of the sunrise and green, green grass covering the highs… It was enough to fill my satisfaction of what I came for. There is this solitude in the rolling mountains, and the feeling of God’s presence… it’s simply something you have to experience.

We descended to the hotel, and it was great to see Landie for the first time, who helped me with a quick transition. We then settled into a good pace, Muzopambwa and I. Following the trail up a very steep climb, Shezi managed to pull away from us.

I felt quite comfortable in the first 36km’s, which was exactly how I wanted to feel. Coming into the aid station feeling strong, in fourth position, well in contact with second and third position, gave my confidence a good boost. Scheffer, however, was well away. Only a mistake on his side was likely to open up that first place again.

But then we hit the flat section: jeep track, my absolute least favorite section on any trail. Both Muzopambwa and Shezi pulled away from me, leaving me in fourth position once again. I however continued with what I knew was most important in a 100km event: eat and hydrate well, enjoy the trails.

At 46km’s, Rory Scheffer, whom I thought was leading by far, was found walking on the route. Muzopambwa and I, running together again, overtook him, and he mentioned something about his calf.

That left us thinking we were racing only one more runner in the front.

As is typical of a 100km race, you start to lose focus. It’s not halfway yet. You see more uphills than there really are. Muzopambwa and I started to slow each other down, instead of pacing each other. When he walked, I walked. When I walked, he walked…

We reached the aid station at 50km’s, I was hoping to see the family and get a quick refill of supplies and maybe a mood lift. Or two.

But there was not a trace of Landie, my mom, Christopher, Anzel… or our car. Something could have happened to the car, or them. I ended up worrying more about them than myself. But I decided to run to the next aid station.

The stations were well stocked with everything necessary.

Muzopambwa and I, by then my teammate and pacer, arrived at the 58km’s aid station, with Shezi leading by 15 minutes.

We had a medical check, which I passed, surprisingly. You somehow hope that they would find something wrong, that someone else could tell you to stop running.

But there was no reason to stop, of course. I could put one foot in front of the other. The pain was more mental, and it’s amazing how much a bit of support can mean.

That was where the race really changed for me. Landie joined, she paced me for the next 15km’s. It was my first time running with a pacer and it helped a great deal. It changed the way I thought and believed during those kilometres. More than motivation, she gave me a consistent pace and took over all the thinking. She reminded me of my form, rhythm, eating, hydration… the things I did not want to, or remembered to, do. Hearing from someone else that I could do it, I was doing well, was refreshing to say the least.

Landie kept us running at a 05:20 pace on the flats. It was comfortable, but at that stage I could not run any faster. Muzopambwa ran with us for a few kilometres.

Then, out of nowhere, Scheffer appeared again. I didn’t think he was still in the race, and scared me a bit as he overtook us quite easily.

That moment felt like game over, and I ran past the next aid station in an attempt to save time. It worked, and I managed to maintain contact with Scheffer, and Muzopambwa was with me again. I knew that I had to keep on going, Landie’s words kept us going. It’s not over until the end… Don’t give up, the one who gives up first will lose the battle.

I can’t remember racing that hard in a 100km before, with the positions changing constantly in the front.

I arrived at the 73km’s aid station just seconds before Scheffer.

However, right there a whole lot went wrong. It was jeep track, and Scheffer could outrun me quite easily.

I could still see him at the next station, but Landie’s pep talk did not ring in my ears anymore. She stopped pacing us.

I was in third position, and I knew one mistake could have the others overtake me easily.

We entered Giant’s Cup trail and the 62km and 32km racers joined us bit by bit. Once again, the Drakensberg was showing off. Those green, grassy hills and streams, with many hikers and campers who dotted the mountains.

It really is something all South Africans must do in their lives – camp in the Drakensberg and disappear from networks for a few days.

Thankfully, I ran with strength again and managed to catch Shezi just before the last aid station at Copham. It was downhill, and Shezi seemed uncomfortable.

That left me racing in second place, with some hope. But by then, you don’t care about positions any more. You run to finish.

There was one more hill and 12km’s left. I pushed to avoid being surprised again, motivated by the nearing end. I climbed well.

On the descent, I however lost some time. My tummy was cramping and I messed around, as is not uncommon for a 100km.

I then noticed a runner behind me. Thinking it was Muzopambwa, I started to sprint without looking back. It was the last three and a half kilometres to the finish line. I came in second.

Two and a half minutes behind me was Prodigal Kumalo, running to win the 32km race. Not Muzopambwa.

That taught me again, everything in a 100km is mental. It’s when you tell yourself you are tired, that you are. Or that you can run a hill, that you have enough energy somewhere inside to sprint race against the 32km winner… it’s all what you perceive. Your mental ability is either a win, or a lose. Everyone’s got a few war stories after a long race. Pushing through, fighting those thoughts, praying… That’s what makes us stronger, what makes us come back for more.

It was good to fight for 11 and a half hours, and I almost reached my fastest 100km time. But Scheffer deserves the win, coming back from almost pulling out, yet still racing hard to take the win… that is an incredible performance.

I’m thankful for our sponsors, they make it easy and worthwhile to travel this far.

We’re definitely equipped with the best gear out there, enabling us to compete in the elements.

My nutrition strategy worked a hundred percent, as I never felt that I hit a complete wall. Whenever I could not eat, I managed to sip on Biogen Cytogen, and did not get tired of the neutral taste. I knew it contained enough calories to sustain me. I also really enjoyed all the good fats and protein from my Buttanut sachets, keeping me strong the natural way.

A big thanks to Häzz coffee, giving me an extra boost and smile before (and after) the race.

I ran with my Naked HC Vest, which was a 100% fit for the UTD. I could manage all my compact K-Way gear and compulsory kit, leaving me to run incredibly free.

Adidas Terrex helped me to maintain a fantastic grip throughout the race. It’s the Drakensberg, yet I never slipped, never fell, never had reason for panic. I really trust my shoes and enjoy being able to take the risks and race my heart out.

Of course, Garmin navigation really saved the day, I had to check my watch numerous times to stay on the route. I loved being able to listen to music from my watch with Bluetooth earphones, which I needed especially on those flats.

It was lovely to see the 30 South team at the race! They gave us some real pep talks and support, all while their sunglasses provided me with excellent vision in the ice cold winds and sunshine hours alike.

Lastly, a big shout out to Emperor Asset Management making a lot of what we do possible.

In the end, it’s not about who is there or not there. It’s not about your position. It’s your own race, your personal battle. Finish strong. 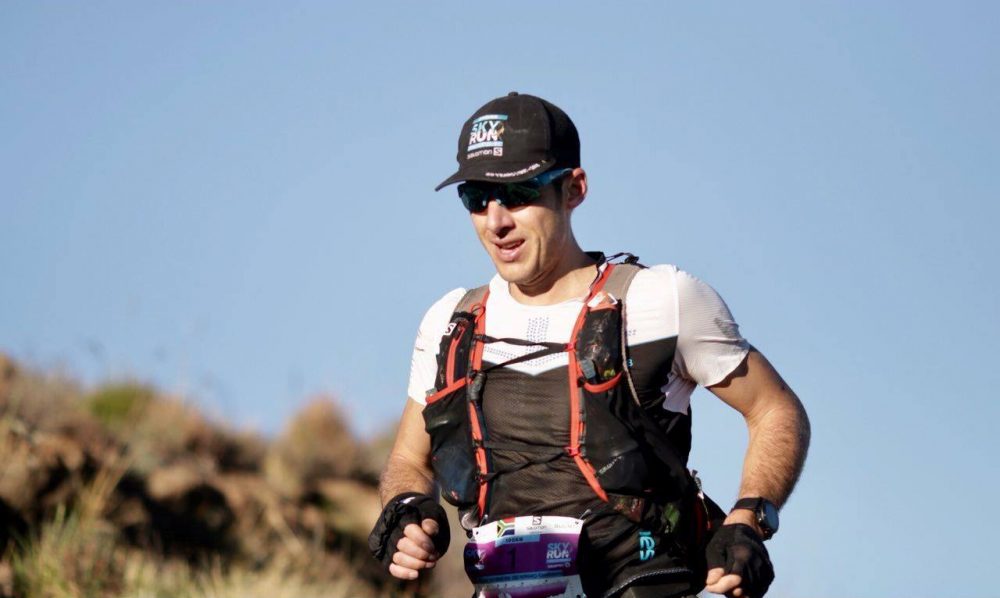 Skyrun is a 100km foot race over the Witteberg mountains at an average altitude of 2000m above sea-level. It is tough, relentless and challenging, and for this exact reason hundreds of runners come together in the small town of Lady Grey to test their faith and courage against the toughest challenge known to any South African Trail Runner. We suffer, sweat, share laughs and tears for up to 30 hours in some of the most remote places on earth. We dehydrate, get altitude sickness, vomit, get sunburned. We learn that our heads are stronger than our bodies, we pick ourselves up out of despair, run forth, jump fences, make new friends, see amazing views and test our gear against the elements of nature. We do this all for one reason: To finish and be a known as a “Skyrunner”!! END_OF_DOCUMENT_TOKEN_TO_BE_REPLACED

Want to train like me? Get more information by downloading the ‘Online Coaching Form’ here so that we can understand where you’re heading.